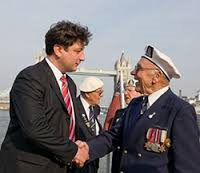 We are grateful for the introduction made by our Patron Admiral The Lord Boyce  to the charismatic Founder and Head of VICTORY DAY LONDON Eugene Kasevin. It was for us immediatly clear that we will join forces to support the creation of awareness for this important time in history.

Victory Day London is a not-for-profit, privately run project, the concept of which was conceived on May the 1st of 2007 with the sole idea to mark the 9th of May Victory Day in London as it is traditionally celebrated in Russia. The very first event was aimed at the City of London business community and was successfully held on the London Regalia barge that used to be moored on the City side of the Thames west of London Bridge.

Starting with 9 May 2008, all subsequent events focused on the Arctic Convoys (1941-1945) with the aim to promote and propagate the legacies of heroic achievements by sailors and all people involved in what the British Prime Minister at the time Winston Churchill referred to as “the worst journey in the world”. From there on the events involve the veterans, both British and Russian, and attract participation from members of The Royal Family, members of governments, senior naval and military officers and the public